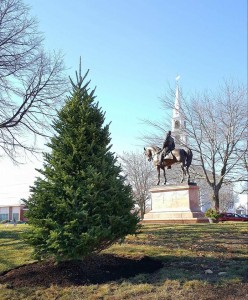 Thanks to the enthusiasm and cooperation of multiple town officials, Citizens for Milford has arranged for the planting of a Christmas Tree as a gift to the community in Draper Memorial Park. Standing at almost nine feet tall, the Fraser fir will grow about one foot each year. We hope the Christmas tree will serve as a symbol of peace and a gesture of good will to all Milford residents and visitors for generations to come.

We would like to extend our sincerest appreciation to following folks who helped us gain the appropriate approvals, purchase the tree, and coordinate the planting:

Milford Christmas Tree to be Planted in Draper Memorial Park this Wednesday, November 25 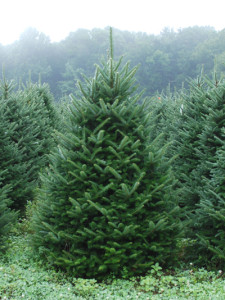 Citizens for Milford is pleased to announce that it has purchased a Fraser fir tree to be planted in Draper Memorial Park this Wednesday morning, November 25, under the direction of Tree Warden Chuck Reneau. The nearly nine-feet tall evergreen will be planted in the section of the park that abuts the corner of Main Street and Park Street. Holiday lights will be installed on the tree by the Highway Department. Citizens for Milford is also donating two large holiday wreaths to be placed on the base of the General William F. Draper statue.

Inspired by the public Christmas tree that stands in Boston Common each December and the National Christmas Tree that has graced the Ellipse outside the White House since the Calvin Coolidge administration, Citizens for Milford hopes that its donation and planting of the Milford Christmas Tree will serve as a symbol of peace and a gesture of good will to all Milford residents and visitors for generations to come.

Citizens for Milford would like to thank the Milford Parks Commissioners, as well as the many town officials who worked with us to gain the appropriate approvals, coordinate the planting, and arrange for electrical services, including: Mike Bresciani, Parks Director; Scott Crisafulli, Highway Surveyor; and Chuck Reneau, Tree Warden. We also extend our appreciation to O’Donnell Electric Company, which donated electrical services; Peter Mezitt, owner of Weston Nurseries, who extended a substantial discount on the purchase; and Nancy Purdue, the Weston Nurseries saleswoman who offered expert advice.

Citizens for Milford Co-Chairmen Steve Trettel and John Seaver were recently interviewed by Al Holman and Kevin Rudden on Milford TV ‘s “30 Minutes with The Town Crier” ( Town Crier Publications).  Sit back and watch the interview to learn more about our mission, projects, and events, including our initiative to improve Town Meeting.