IMPORTANT! The Veterans Day Ceremony WILL be Held in Draper Park on Monday Following the Parade. PLEASE JOIN US in Honoring Our Veterans. 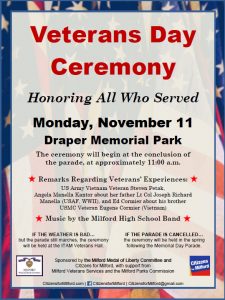 The Milford Medal of Liberty Committee and Citizens for Milford invite all area veterans and residents to attend the Third Veterans Day Ceremony, to be held Monday, November 11 in Draper Memorial Park, weather permitting. The ceremony will begin immediately following the conclusion of the Veterans Day Parade at approximately 11:00 a.m.

The Veterans Day Ceremony will begin with a prayer from Father Peter Joyce of St. Mary of the Assumption Church, followed by the sharing of war-time stories by area veterans and their families. Medal of Liberty Chairperson Peter Scandone will preside over the ceremony. Music will be performed by the Milford High School Marching Band and a Milford High School quartet.

Making remarks regarding military service will be US Army veteran Steven Petak speaking about his service in Vietnam; Angela Manella Kantor sharing the experiences of her father US Air Force Lt Col Joseph Richard Manella as a prisoner of war during World War II, and Ed Cormier speaking about his brother US Marine Corps Private Eugene Cormier, who was killed in Vietnam during Operation KINGFISHER.

The Field of Flags, a tribute acknowledging the service and sacrifice of our veterans and active military personnel, will be installed in Draper Memorial Park the Wednesday before Veterans Day. Parade and ceremony attendees are invited to walk among the flags and monuments in Draper Park and read the names of the veterans and active military who are memorialized and honored there. 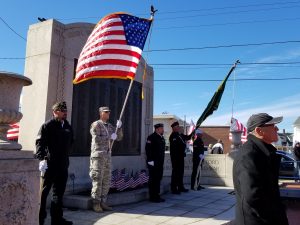 r Scandone says, “Generations of Milford men and women have served our community and country honorably and heroically. We encourage all residents to join us for the Veterans Day Parade and Ceremony to show our support and gratitude.”

If the weather is excessively cold or rainy, the committee will hold the ceremony inside at the Italian American Veterans Hall (4 Hayward Field, Milford) following the parade. Notification about this change of venue will be posted on the Citizens for Milford Facebook page and website on Sunday, November 10. If the parade is cancelled due to rain, the Veterans Day Ceremony will be held in the spring following the Memorial Day Parade.

Draper Memorial Park occupies a triangle of land in the downtown Milford area, located at the intersection of Congress Street and Main Street. The park features monuments that list the names of veterans who served during World War II, the Korean War, and the Vietnam War. Standing tall in the park is the statue of General William Franklin Draper by sculptor Daniel Chester French, whose work also includes the massive marble statue of Abraham Lincoln in the Lincoln Memorial in Washington, D.C. The care and management of Draper Memorial Park falls under the authority of the Milford Parks Commission and Milford Veterans Services.

BE THERE! Pre-Town Meeting Forum Scheduled for October 22 in Upper Town Hall at 7:00 p.m.

In Addition to Reviewing 10 Articles, the Forum Will Feature a Demonstration of Electronic Voting

The Town Meeting Study and Improvement Committee has selected and ranked the Oct. 28th Special Town Meeting Warrant Articles to be addressed at the October 22, 2019 Pre-Town Meeting Forum from those submitted with the highest number of responses.

The Committee encourages Town Meeting Members and the public to attend and participate in the Forum and thereby become better informed on the issues that will be considered at the October 28, 2019 Special Town Meeting.

The Forum’s goal is to address the 10 selected articles in approximately one and a half hours. 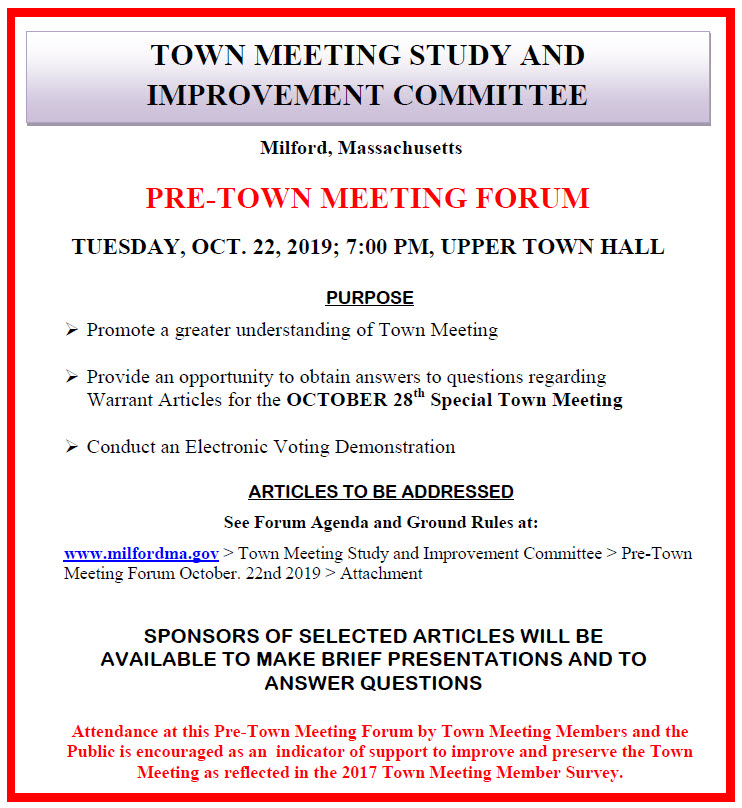 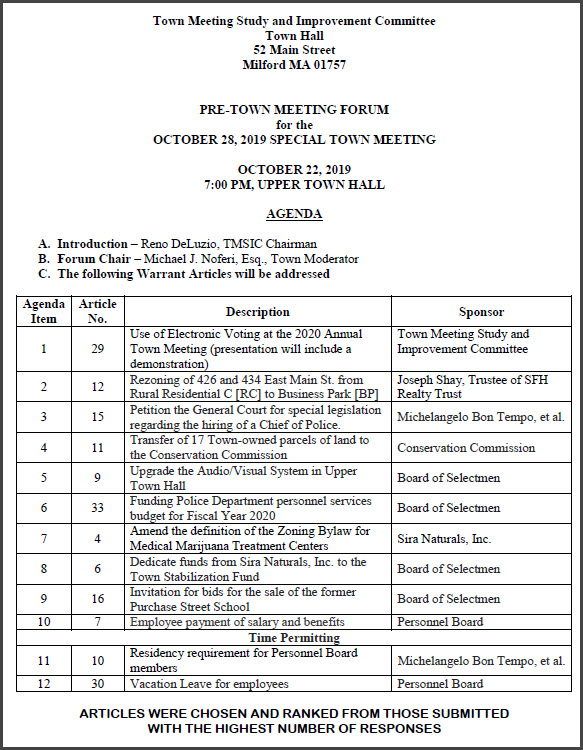