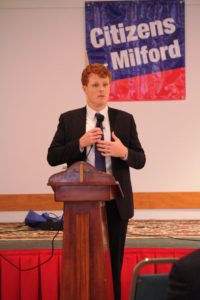 Citizens for Milford was pleased to host Congressman Joe Kennedy III at our public meeting on May 3, 2016,  titled “A Conversation with Congressman Joe Kennedy III.” About 50 Milford residents attended this informal question and answer event. Following opening remarks by the Congressman regarding his work in the U.S. House of Representatives, attendees were invited to pose questions. Questions ranged from tackling the dysfunction in Congress, to the treatment of people with disabilities, how federal arbitration is used to deny rights to consumers, the solvency of Social Security and Medicare, and immigration issues. 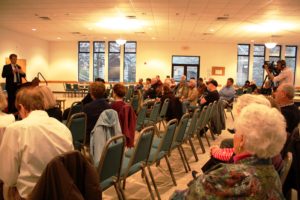 Asked by a Milford resident what we as constituents can do to help move things along in the midst of a dysfunctional Congress, Kennedy answered, “You get out of government what you put into it. If you don’t vote, how are you sending a signal to Washington as to what we are supposed to care about?… We can move the country forward by having everyone make their voices heard.  …  Make your voices heard, and make us accountable.”

Milford TV video recorded the event, and we will post that video as soon as it is available. The event video will also be broadcast on Milford TV.

You can read more about the Congressman and his policies on his website Kennedy.House.gov.