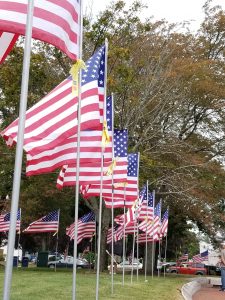 Citizens for Milford is continuing its partnership with the Milford Corps of the Salvation Army to expand the Draper Memorial Park Field of Flags, a tribute acknowledging the service and sacrifice of our veterans and active military personnel with a display of American flags to be placed in Draper Memorial Park on five patriotic holidays each year. The next display will be installed this Veterans Day.

The $60 donation sponsors a flag in Draper Park for all five of the following patriotic holidays: Veterans Day 2018 and Memorial Day, Flag Day, Fourth of July, and Labor Day 2019.

To sponsor or renew a flag for the Draper Memorial Park Field of Flags project, simply complete a sponsorship form and mail it to the address provided on the form with a $60 check made out to the Salvation Army before November 2, 2018. Requests for a printed sponsorship form can be submitted by email to CitizensforMilford@gmail.com. 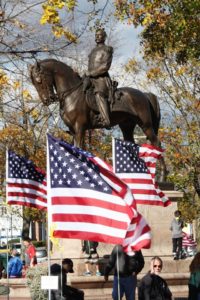 ield of Flags Chairperson Peter Scandone says, “Since we launched the Field of Flags two years ago, we have accepted sponsorships for nearly 150 flags, each one honoring the heroism of our many local veterans and active duty service members. Our goal is to have every one of those flags renewed and to gather enough new flag sponsorships so that we will be installing 200 flags this Veterans Day.”